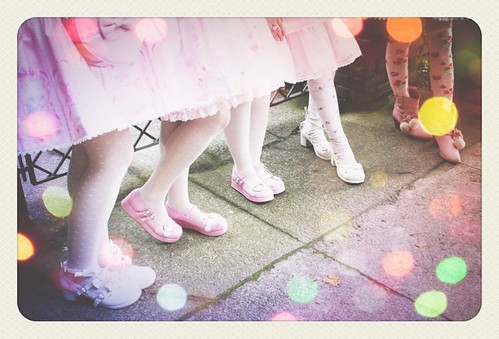 shamelesslilly's karaoke idea from this post! I'm thinking this event is suited more to late afternoon/early evening, probably 4-5 pm start time. The entrance fee is $5 per person, not including food. If we get 10 or more people coming, we can reserve a private room for the same price! ^_^ Which would be pretty cool.

Well, Anime Banzai was so fun! Thanks to

shamelesslilly, and one of our new members

abhasana for coming to the Lolita panels! If anyone else was there, let me know.

I was super duper nervous, but everyone made me feel fantastic and I hope I helped y'all in some way. If you have some feedback for next time, please let me know!

Hello! I became aware of this group while attending Anime Banzai over this past weekend. I got to meet a few people who were members of this group and I'm interested in participating in meetups.

I'm Silence (yes, really; I usually go by Sy). I'll be 30 in a few weeks and have been a fan of lolita fashion for around ten years. Despite enjoying it as much as I do, I have never quite gotten around to purchasing or making lolita-type clothing, so my lolita/aristocrat wardrobe is almost-but-not-quite nonexistant. In the past few years I have felt like I've aged out of lolita and am more oriented to an aristocrat look; this is just a personal thing and in no way passes judgment on people of similar age who dress in lolita. :)

Gothic lolita has always been my favorite style. I love it all to one degree or another, but I haven't seen much outside that style that I can imagine myself wearing. Aside from gothic, I'm a fan of classic lolita, as well. I'm very excited to see how much experimentation has been done with dandy/ouji/boystyle in the past few years and I'd love to see what local folks have done in these styles.

Aside from lolita and aristocrat, I'm kind of a fashion dunce. It's going to take me as long to graduate from a student wardrobe as it did to graduate from being a student (sigh). For now, it's mostly jeans and second-hand Black Chandelier shirts for me.

I love to sew and do quite a bit of it. I do custom and comission work when I have the time. I most enjoy historical and costume pieces, and I'm interested in finally getting around to the goth and fetish ideas I've had rattling in my head for years. Other hobbies include knitting, embroidery, book collecting, and vegan/vegetarian cooking. I've recently decided that balljointed dolls are freakin' awesome. I just got my first one and I'm having a blast with him. (I'm gonna make widdle clothes and widdle shoes and get lotsa widdle wigs and yay!)

Other stuff: I'm a recent U of U graduate (environmental studeies), I have 2 - 3 jobs at any given time (I love work!), I live in an adorable apartment in a 100 year old building, and have a cat. I'm not super outgoing so I don't do a lot of social activities, but I am looking forward to meeting new people at local meetups.

Nice to meet you!
Collapse